Although I am no longer able to walk with Anne, I was determined to walk the western section alone this year and I feel a sense of achievement at having done so.  Some of the earlier sections ended up being rather short, either due to hot weather (if I had the dogs with me), or the necessity of doing circular walks due to the lack of public transport, but it is now complete.  Where next?
Posted by Daras at 18:30 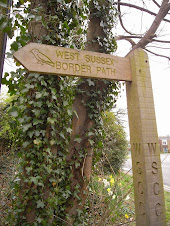 Daras
Married with two grown up children, I live near Ashdown Forest in East Sussex where I love to walk our two dogs.